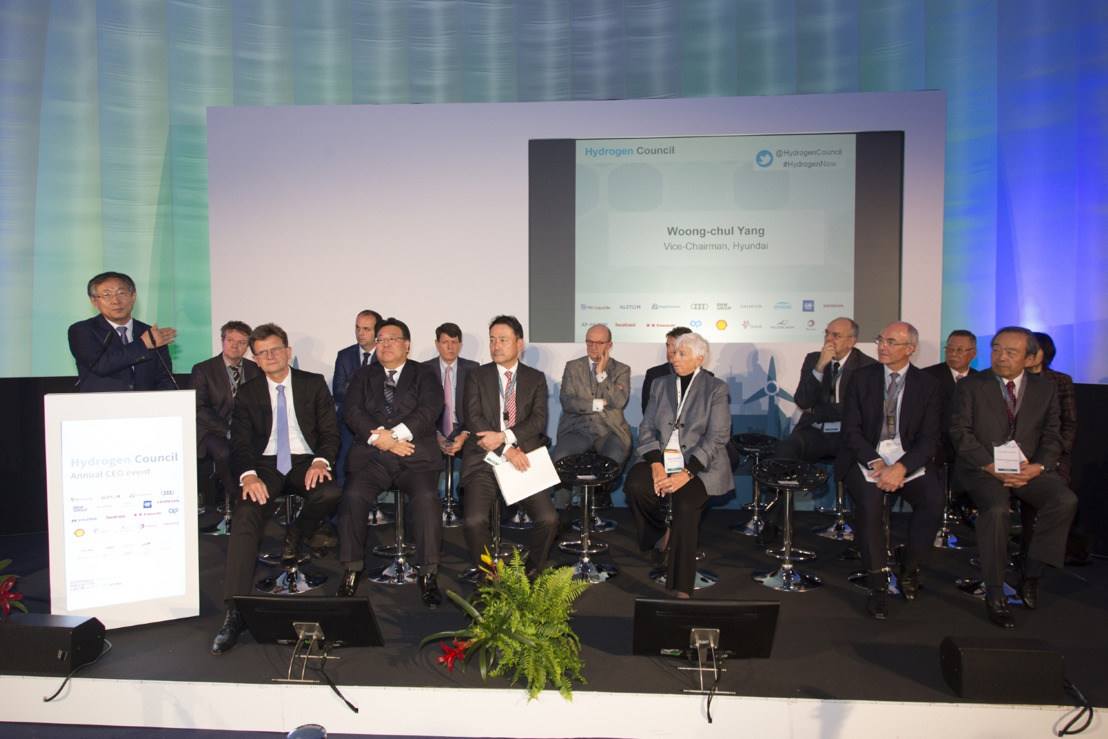 Taking the Hydrogen Council’s vision for hydrogen to the next level, the study entitled Hydrogen, Scaling up outlines a comprehensive and quantified roadmap to scale deployment and it’s enabling impact on the energy transition.

Deployed at scale, hydrogen could account for almost one-fifth of total final energy consumed by 2050. This would reduce annual CO2 emissions by roughly 6 gigatons compared to today’s levels, and contribute roughly 20% of the abatement required to limit global warming to two degrees Celsius.

On the demand side, the Hydrogen Council sees the potential for hydrogen to power about 10 to 15 million cars and 500,000 trucks by 2030, with many uses in other sectors as well, such as industry processes and feedstocks, building heating and power, power generation and storage. Overall, the study predicts that the annual demand for hydrogen could increase tenfold by 2050 to almost 80 EJ in 2050 meeting 18% of total final energy demand in the 2050 two-degree scenario. At a time when global populations are expected to grow by two billion people by 2050, hydrogen technologies have the potential to create opportunities for sustainable economic growth.

“The world in the 21st century must transition to widespread low carbon energy use,” said Takeshi Uchiyamada, Chairman of Toyota Motor Corporation and co-chair of the Hydrogen Council.  “Hydrogen is an indispensable resource to achieve this transition because it can be used to store and transport wind, solar and other renewable electricity to power transportation and many other things. The Hydrogen Council has identified seven roles for hydrogen, which is why we are encouraging governments and investors to give it a prominent role in their energy plans. The sooner we get the hydrogen economy going, the better, and we are all committed to making this a reality.”

Achieving such scale would require substantial investments; approximately US$20 to 25 billion annually for a total of about US$280 billion until 2030. Within the right regulatory framework – including long-term, stable coordination and incentive policies – the report considers that attracting these investments to scale the technology is feasible. The world already invests more than US$1.7 trillion in energy each year, including US$650 billion in oil and gas, US$300 billion in renewable electricity, and more than US$300 billion in the automotive industry.

“This study confirms the place of hydrogen as a central pillar in the energy transition, and encourages us in our support of its large-scale deployment. Hydrogen will be an unavoidable enabler for the energy transition in certain sectors and geographies. The sooner we make this happen the sooner we will be able to enjoy the needed benefits of Hydrogen at the service of our economies and our societies,” said Benoît Potier, Chairman and CEO, Air Liquide. “Solutions are technologically mature and industry players are committed. We need concerted stakeholder efforts to make this happen; leading this effort is the role of the Hydrogen Council.”

“Every member of the Hydrogen Council shares and acts upon a common vision, to grow the hydrogen economy and help combat climate change,” said Dr. Woong-chul Yang, Vice Chairman of Hyundai Motor Company.  “Hydrogen energy is the key to building a more sustainable society but to achieve this we must drive fundamental changes in the global energy system. Hyundai Motor Company has already taken a lead in the automotive sector and hydrogen technology can also serve the needs of other industries. Therefore we call upon governments and investors to help us move ahead with the long-term plans to grow vital infrastructure that will allow the mass-production and utilization of hydrogen energy.”

The launch of the new roadmap came during the Sustainability Innovation Forum in the presence of 18 senior members of the Hydrogen led by co-chairs Takeshi Uchiyamada, Chairman of Toyota and Benoît Potier, Chairman and CEO, Air Liquide and accompanied by Prof. Aldo Belloni, CEO of The Linde Group, Woong-chul Yang, Vice Chairman of Hyundai Motor Company and Anne Stevens, Board Member of Anglo American. During the launch, the Hydrogen Council called upon investors, policymakers, and businesses to join them in accelerating deployment of hydrogen solutions for the energy transition. It was also announced that Woong-chul Yang of Hyundai Motor Company will succeed Takeshi Uchiyamada of Toyota in the rotating role of the Council’s co-chair and preside the group together with Benoit Potier, CEO Air Liquide, in 2018. Mr Uchiyamada is planning to return as Co-chairman in 2020, coinciding with the Tokyo Olympic and Paralympic Games, an important milestone for showcasing hydrogen society and mobility.

About the Hydrogen Council:

About Hydrogen Council meetings at COP 23:

The Council will gather at COP 23 to conclude the first year of its activity. While in Bonn on 13-14 November 2017, CEOs and other senior representatives will participate in a range of high-level roundtables, interactions with policy-makers as well as the media and the broader stakeholder community.

The Hydrogen Council is led by two Co-Chairs from different geographies and sectors, elected by Steering Members for a two-year term, each year one of the two Co-chair mandates is renewed for continuity.

For further information about the event and related media opportunities:

Hydrogen is a versatile, clean, and safe energy carrier that can be used as fuel for power or in industry as feedstock. Generating zero emissions at point of use, it can be produced from (renewable) electricity and from carbon-abated fossil fuels, thereby achieving completely zero-emission pathways. The uses for hydrogen continue to grow as it can be stored and transported at high energy density in liquid or gaseous form and can be combusted or used in fuel cells to generate heat and electricity. This versatility confers to hydrogen a key enabling role all together in the transport, the industry and the residential sectors, as well as for the large-scale storage of renewable energies, making it a promising solution to overcome the challenges of the energy transition.